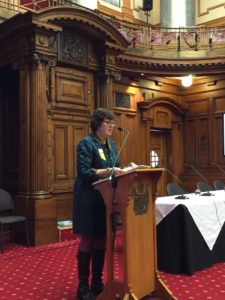 The New Zealand Political Studies Association (NZPSA) hosted a Civics, Citizenship and Political Literacy workshop on Monday, 10 October 2016 in the Legislative Council Chamber at Parliament. The workshop was hosted by Hon Nicky Wagner MP in association with Ruth Dyson MP, Tracey Martin MP, Marama Fox MP and Eugenie Sage MP. This forum created the opportunity to listen to different perspectives and discuss next steps towards a civically engaged New Zealand. The workshop was opened with a mihi by University of Canterbury and NZPSA working group member Professor Angus Hikairo Macfarlane.

Associate Professor Bronwyn Hayward, Chair of the NZPSA working group, acknowledged the support of MPs from across the house and welcomed participants to this important conversation. She asked attendees to think more broadly about political participation, moving from voting to how we might better connect with each other in our communities. Clerk of the House, David Wilson, then stressed the need to reach out to groups who are historically disengaged. He discussed the role of select committees in improving public participation and accountability in parliament.

Over the day there were four panels: 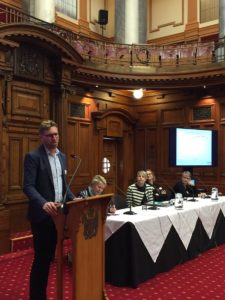 Panel One
Chair of the first panel, Hon Nicky Wagner, MP for Christchurch Central, introduced the first panel of speakers and the discussion point: The state of civics, citizenship and political literacy education, what are we doing well now?

Richard Thornton, Deputy Chief Executive of the NZ Electoral Commission, opened the panel sharing statistics on voter turn out. He argued that unless something is done to make change, we can expect voter turnout to worsen. Richard then shared examples of how kids participation is being woven into classrooms through educational resources such as the Electoral Commission’s Kids Voting Programme, which aims to provide an authentic voting experience. He highlighted this is best achieved when the teachers are confident facilitators.

Mary Greenland from the New Zealand Social Studies Association, New Zealand Curriculum, shared the landscape of social sciences education in New Zealand. After Year 10 social studies, social sciences are incorporated into different subject areas, such as history, geography and economics. She defined social sciences as ‘how people can participate as critical, active, informed, and responsible citizens’.

Miranda Thomson from the Parliamentary Classroom Education programme, spoke about her work bringing New Zealand students through parliament to enhance youth engagement with and understanding of parliament. Miranda explained the free resources they provide online for schools: a Māori language resource, how to run a debate role play, and Explore Parliament primary and secondary kits with teacher guides and how to align these kits with the curriculum. She also shared the different education programme tours on offer at Parliament: how Parliament works, a debating role play, Eye of the Hive programme, and A Capital Idea. Miranda highlighted the importance of student inquiry and framing learning through asking questions to provoke thought as opposed to simply telling them information.

The final speaker on the panel, Sarah Tebbs from the Ministry of Culture and Heritage, shared one of the ministry’s goals: to foster an inclusive New Zealand identity, and discussed how the ministry aim to get there. She also discussed the importance of cultural engagement, a sense of identity and belonging in New Zealand, and social cohesion.

Panel Two
Chair of the second panel, Ruth Dyson, MP for Port Hills, introduced speakers and the discussion point: Where could we add the most value, make the biggest different in civics, citizenship and political literacy education? 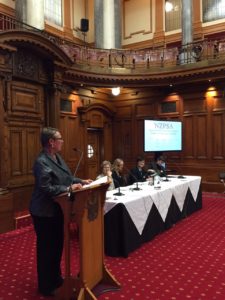 Rose Hipkins, Chief Researcher at New Zealand Council for Educational Research, discussed post-truth politics and the lack of respect for expertise as people refuse to accept their evidence. Rose shared the Council’s aim to add value where they can to create an environment of learning for the sake of it.

Bronwyn Wood, senior lecturer at Victoria University, discussed effective citizenship education and the importance of early engagement in schools. She shared new social action standards in schools that contribute to society and connect students to people in the community. She noted the difference between student-led and teacher-led projects, saying that when students get the freedom to choose a topic, they are more interested and engaged from the beginning. These projects also help students learn to cope with failure as assessment is based on reflection, not success.

Andrew Chen shared what UN Youth were doing in New Zealand and what they planned to do going forward. Having grown out of the Model UN programme, UN Youth addresses civics education. Andrew was concerned with nationwide access to UN Youth resources. Traditionally UN Youth events are held in major cities – people have to travel to get there – and not everyone has the opportunity. He said we need to overcome the assumption that civics is for loud, knowledgeable, opinionated people as an extra curricular, when it is for everyone in society. UN Youth is currently working on ways to bring civics education to the people: shifting resources online and going to local communities to allow everyone access. Andrew shared SavY – Saving Generation Y – which aims to promote good financial habits in all youth, regardless of their background or aspirations in life by providing free, hour-long financial literacy workshops in secondary schools presented by University of Auckland students. This initiative is a collaboration between the University of Auckland and BNZ.

Shilinka Smith, CEO of Fusion Virtuoso Social Enterprise, discussed her new venture and the importance of empowerment. Located on Manners Street in Wellington, Fusion Virtuoso is available as a venue for hire, or is open for coffee and cocktails. They use the funds they raise to support diversity and inclusion in New Zealand.

Panel Three
Chair Marama Fox, Co-Leader of the Māori party, introduced speakers and the discussion point for the third panel: Where to now? The next steps and measures of success in a bicultural and multicultural democracy.

Professor Angus Hikairo Macfarlane from Canterbury University and NZPSA discussed how our history should inform the way we teach political literacy: we are a multicultural society predicated on a bicultural history. Angus said people are living and working together in two different worlds. We need to live together to make political literacy gentle.

Maria Bargh, senior lecturer at Victoria University and NZPSA shared three key ideas: a broader, deeper civics education made compulsory in secondary schools to include pre-1840 Māori history; politicians to be leaders in embodying New Zealand values; and universities incentivised to teach New Zealand politics and history. Future policy-makers need to have this background, whatever specialty. Maria provided the example of Turangawaewae, a core paper on Māori history at Massey University.

Dr Iati Iati, from the University of Otago and NZPSA, shared his cultural background and discussed Pacific peoples disengagement from political processes. He questioned why participation is so low in New Zealand, when at home everyone is heavily engaged at a local and national level. Iati argued it was a lack of awareness: Pasifika people do not realise what they have to lose if they don’t participate. They need to be aware of the issues that affect their interest. Iati suggested identifying spaces in the public sphere to share knowledge through civil society organisations, to bridge the gap between ordinary people and the political process.

Josiah Tualamali’i, Chair of the Pacific Youth Leadership and Transformation (PYLAT) Council, shared the Council’s common idea for Pacific youth to have a voice in politics. Josiah discussed the identity crisis facing some Pacific youth as they navigate who they are in both cultures. For example, New Zealand-born Pacific youth struggle to understand their home language, contributing to a sense of cultural deficit. He then presented five things you need to actively participate in society: a driving license, bank account, IRD number, enrolment to vote (before leaving school) and a passport. Josiah saw a role for schools to step up and provide guidance to help youth obtain these essentials.

Wendy McGuinness, Chief Executive of the McGuinness Institute, discussed what she sees as the four stages in civics: mindset, listening, agreement and mandate. Wendy also shared key findings from the Institute’s work as part of The Civics and Media Project as well as the ForesightNZ workshop. For more detail on Wendy’s presentation, view the slideshow below or download it from the McGuinness Institute website.

Rachel Bolstad shared her work at the New Zealand Council for Education Research (NCER) on future-oriented education and the role and potential of digital technologies in education. NCER is an independent educational research organisation generating the ideas, questions, tools, products and services to meet educational needs now and for the future.

Katie Bruce, Director at Just Speak, discussed their work around empowering youth. JustSpeak is a network of young people speaking to, and speaking up for a new generation of thinkers who want change in our criminal justice system.

Dr Bryce Edwards, from the University of Otago and NZPSA, put forward the following questions for attendees to consider going forward.

The formal workshop was followed by refreshments, providing participants with a chance to connect and discuss key points and possible next steps.

About the Institute’s Project CivicsNZ
CivicsNZ aims to build social capital and improve empowerment and has two main work streams. Firstly, the Institute closely followed the progress of the Constitutional Advisory Panel, researching and reporting on key elements or issues. Secondly, building on the sentiments expressed during the StrategyNZ: Mapping our Future workshop – that young people need to be involved in, and have the capacity to engage with civic debate in New Zealand – the Institute hosted a forum for young New Zealanders to discuss the Constitutional Review. We have begun preliminary discussions around pursuing a national strategy for civics and citizenship education in schools and in the community, as recommended by the Constitutional Advisory Panel. We are looking to work with others who are interested in this area. Register your interest to follow our discussions here.