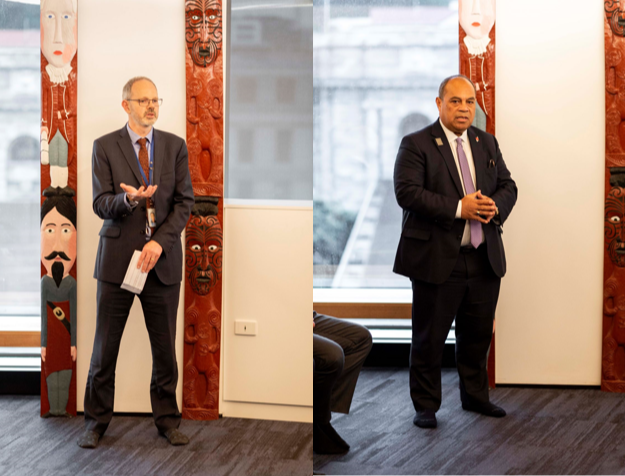 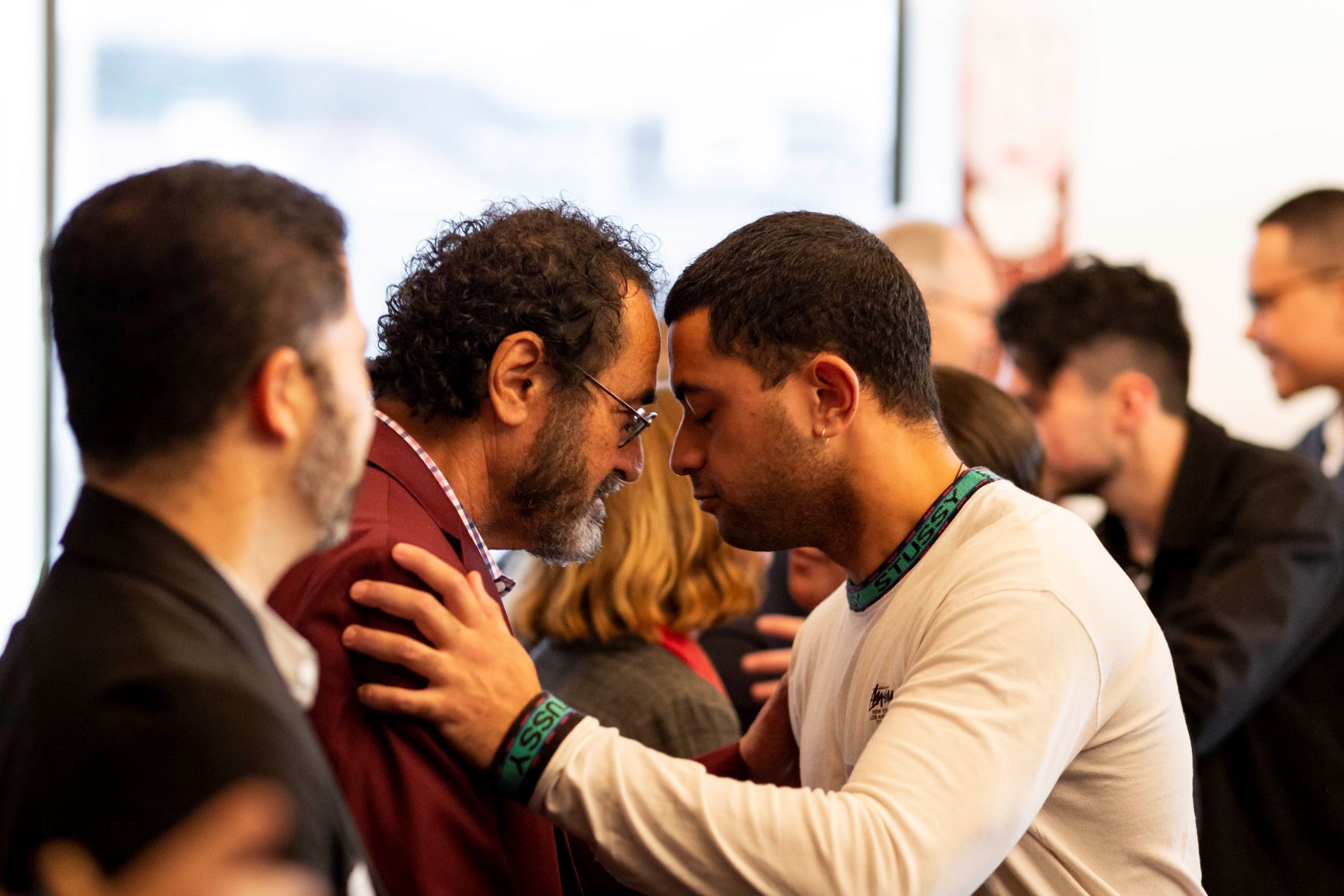 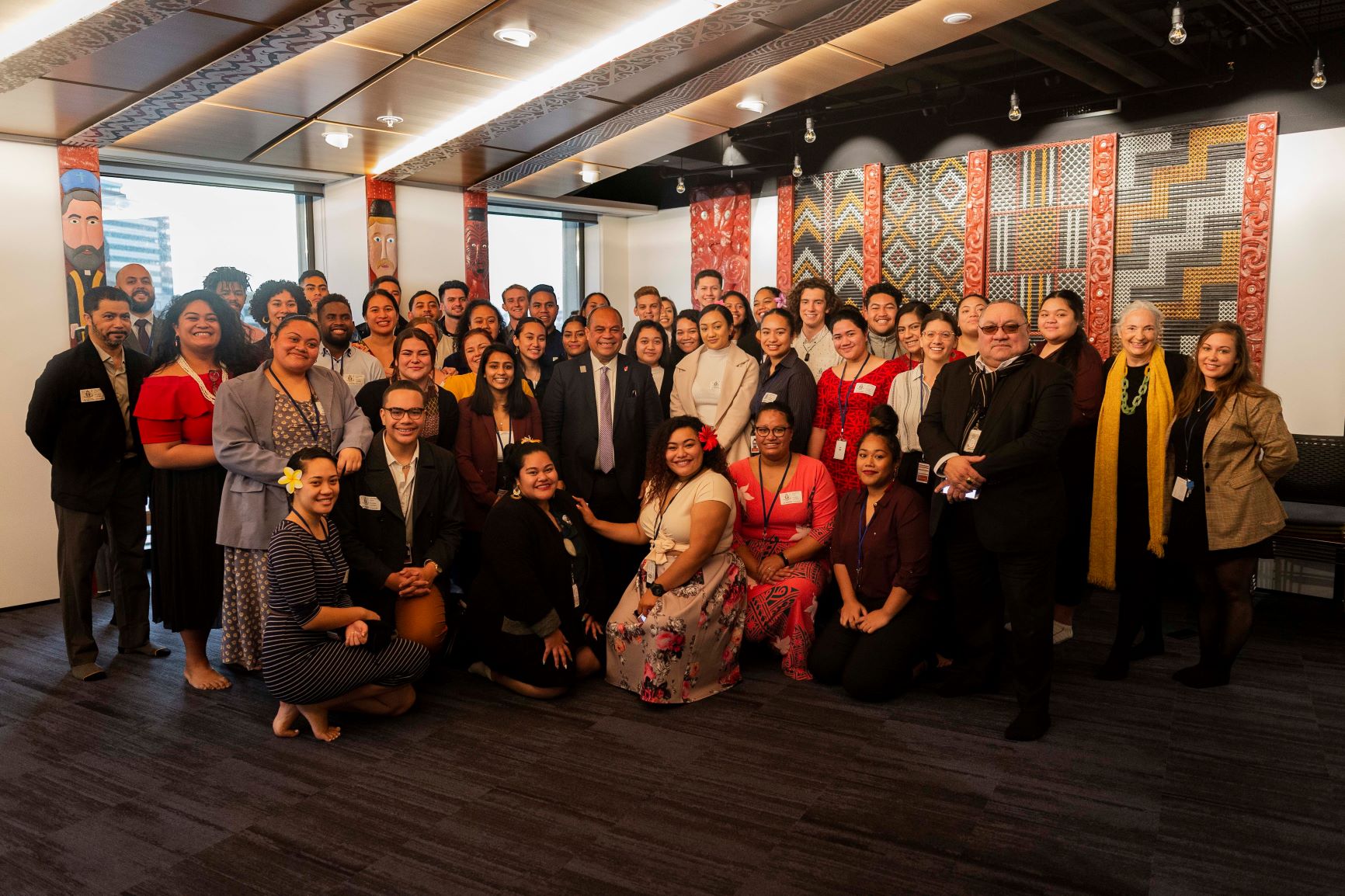 KiMuaNZ participants and Treasury staff in the wharenui

The rest of the day was made up of two sessions, each with a panel of five speakers discussing the direct challenges and opportunities of climate change from their unique perspectives. At the end of each panel, the speakers joined the workshop participants at their tables for hot seat discussions. This gave participants the chance to ask questions and develop the content for their presentations to the Governor-General the following day.

Su’a Thomsen, Principal Advisor at the New Zealand Treasury, kicked off the first panel by talking about the implications of small island states accepting aid. He discussed the importance of such nations being able to absorb these resources into their financial systems, highlighting the fact that, in some cases, the Ministry of Finance in Pacific nations can be made up of only one or two people. 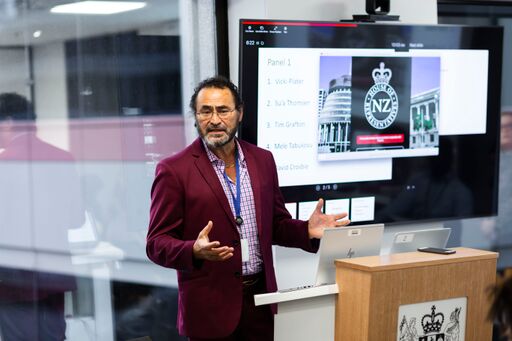 Vicki Plater, Director of Growth and Public Services at the New Zealand Treasury. Vicki discussed her experience in international development and her own time in the Pacific. She highlighted the importance of thinking holistically about climate change as not just an environmental issue, but an economic, social and political issue. This was linked in particular to the Treasury’s work in developing the Living Standards Framework, which enables Treasury to consider wellbeing trade-offs from an intergenerational perspective. 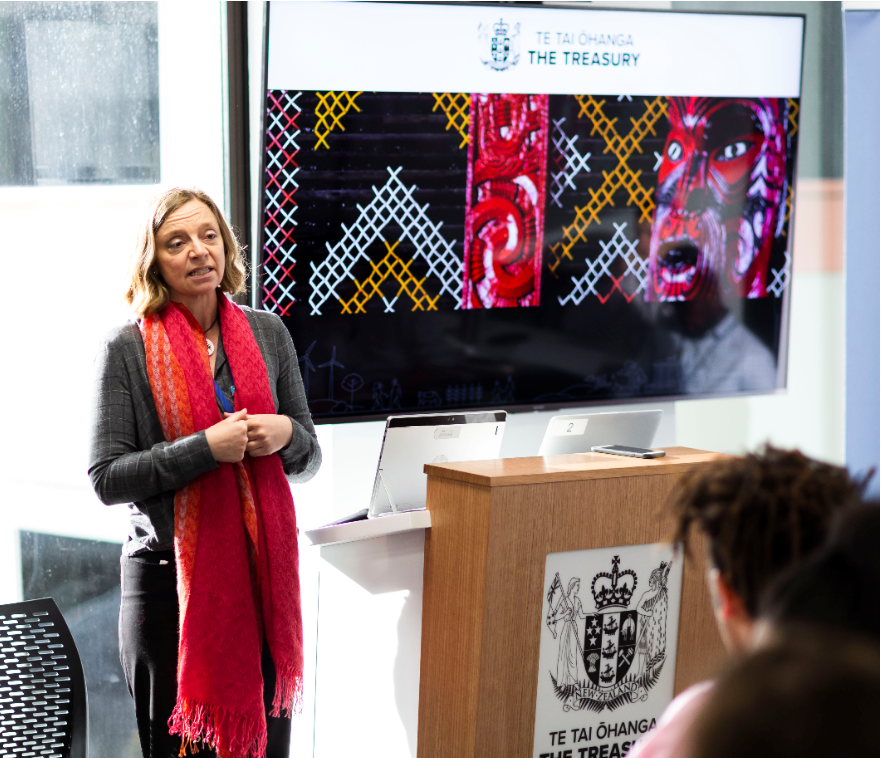 Tim Grafton, Chief Executive of the Insurance Council, shared the unique positioning of insurers in the climate change landscape. Tim stressed that the insurance costs for extreme weather events in the Pacific have tripled in recent years. For insurers, thinking around climate change can be grouped into three points:

As part of the solution to climate change, Tim proposed the creation of an accessible and searchable database of the natural hazard risk of every property in New Zealand. He explained that the technology to do this currently exists and a system like this would allow banks to radically change their thinking around climate change insurance. Local authorities and government would also be much better informed about national long-term adaptation planning. 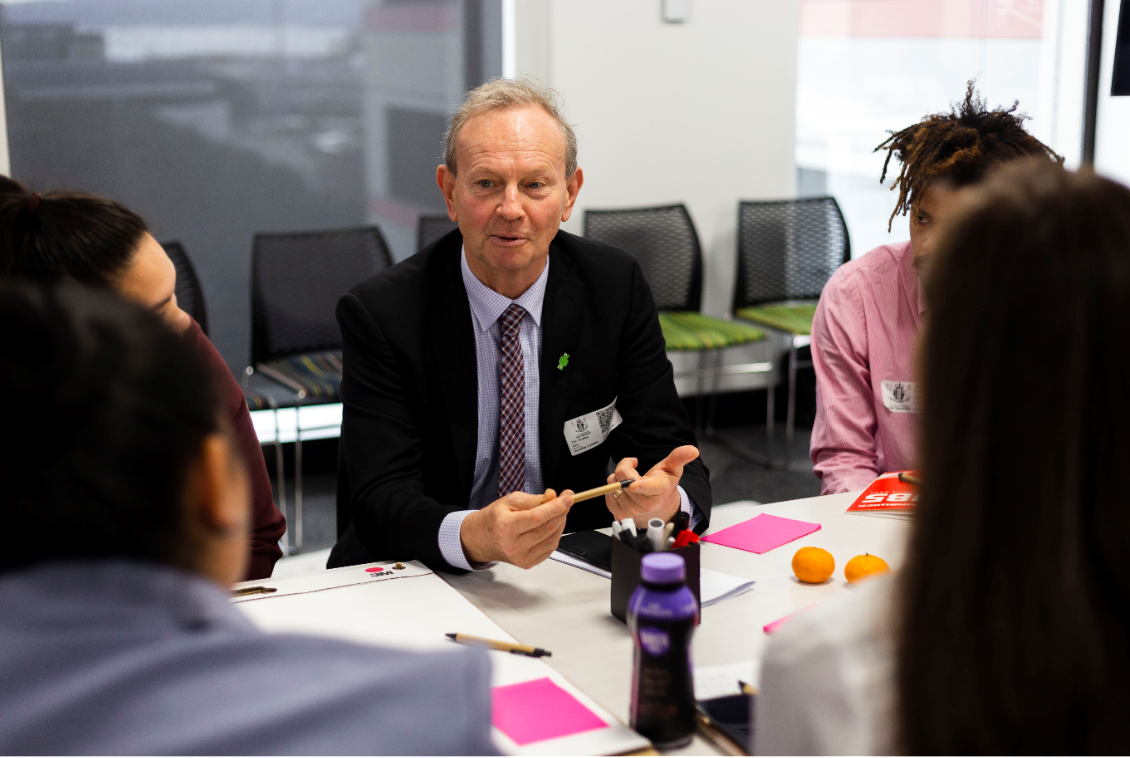 Up next was Mele Tabukovo who works on developing polices under the emissions trading scheme in her role at the Ministry for Primary Industries. Mele spoke about advising government on agriculture emissions and raised an article she had recently read that described an extreme future scenario under a 4ºC temperature rise, leaving New Zealand as one of the few remaining inhabitable land masses. She discussed the contentiousness of a possible shift in the New Zealand agricultural sector to reduce emissions. She stressed that since the agriculture sector is such an integral part of New Zealand’s economy, climate change will have an enormous effect on the industry as well as on the livelihoods, identities and legacies of farmers. 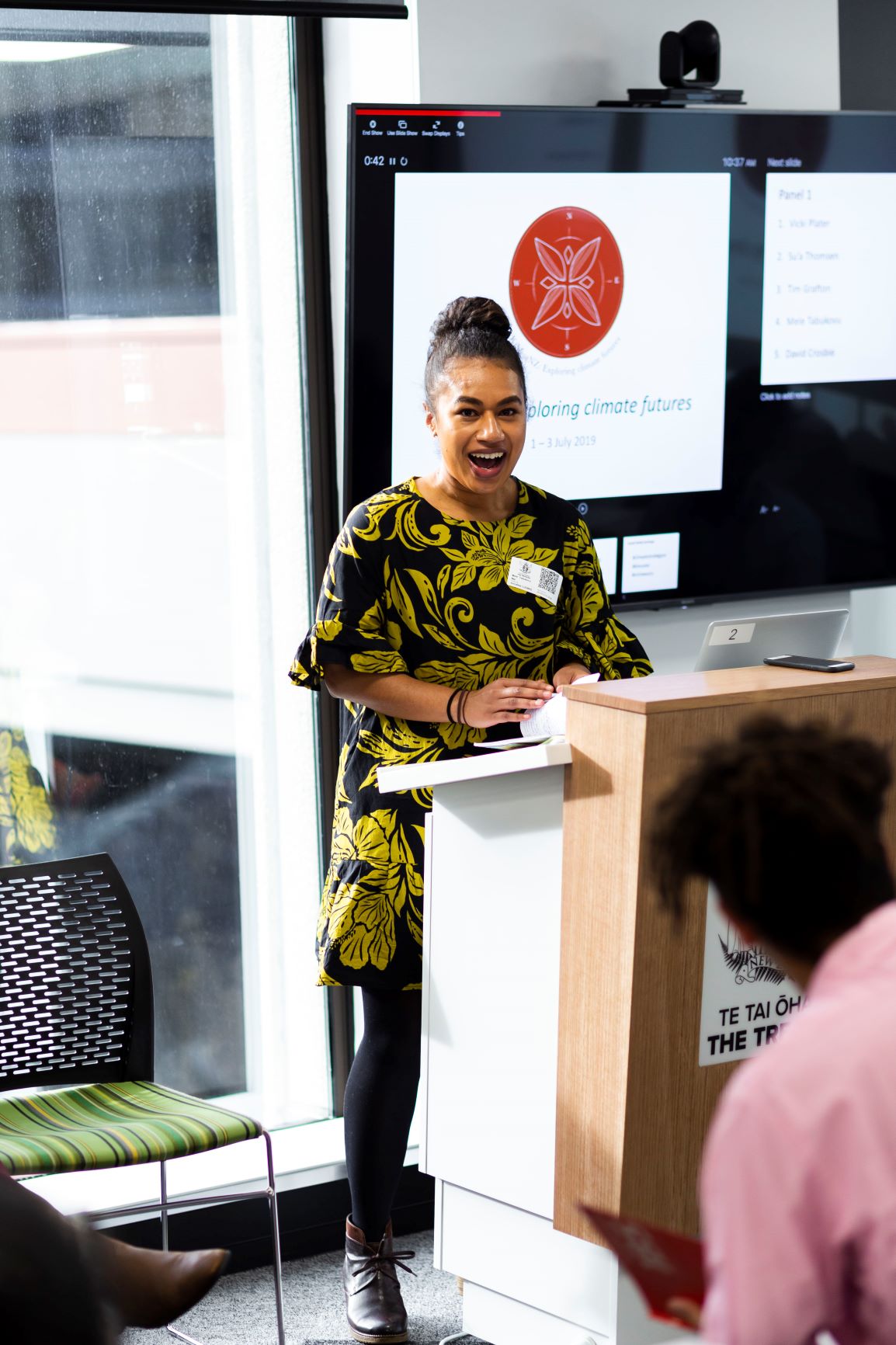 David Crosbie, Associate Social and Urban Development Specialist with Jacobs, spoke about the necessity of empowering vulnerable communities as part of international social development. David referenced his current work in Kiribati, which looks at how to address resilience issues impacting the atoll, such as land inundation due to frequent king tides, and increased urbanisation. He also discussed his time in Fiji while working with the Asian Development Bank, and stressed the importance of such institutions in collaborating with local communities rather than just delivering top down infrastructure, especially when mitigating climate change. For New Zealand, David discussed how the country will have to future-proof its current infrastructure, especially considering New Zealand will likely have to cater to a larger population owing to migration due to climate change. He noted that we should invest in climate-friendly infrastructure in cities and urban centres as these areas are responsible for 70% of energy emissions globally. 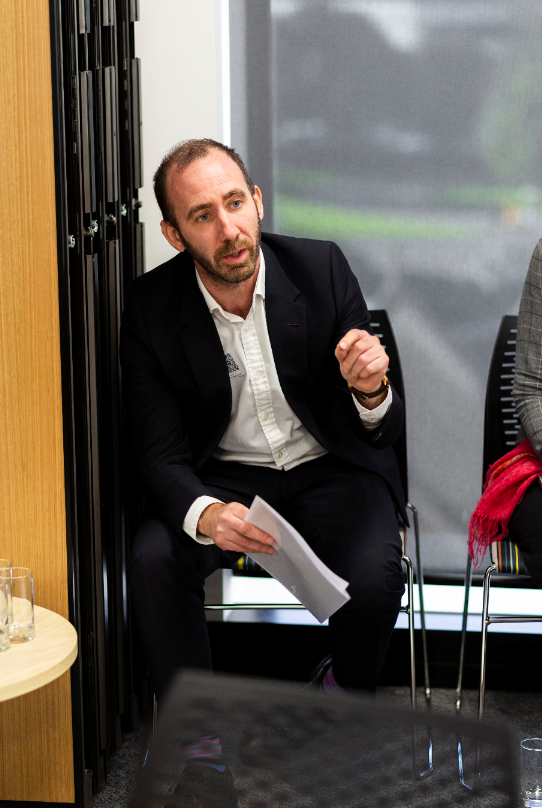 After lunch, Trevor Moeke, Principal Advisor of Crown Māori Capability at New Zealand Treasury, opened panel two. Trevor spoke about the importance of acknowledging indigenous perspectives when developing solutions to climate change, stressing a bilingual and bicultural approach. He noted that many modern technological innovations around sustainability mirror traditional indigenous practices. He ended up by asking the audience to consider that some of the answers lie in the narratives around the ancient indigenous narratives and faith. 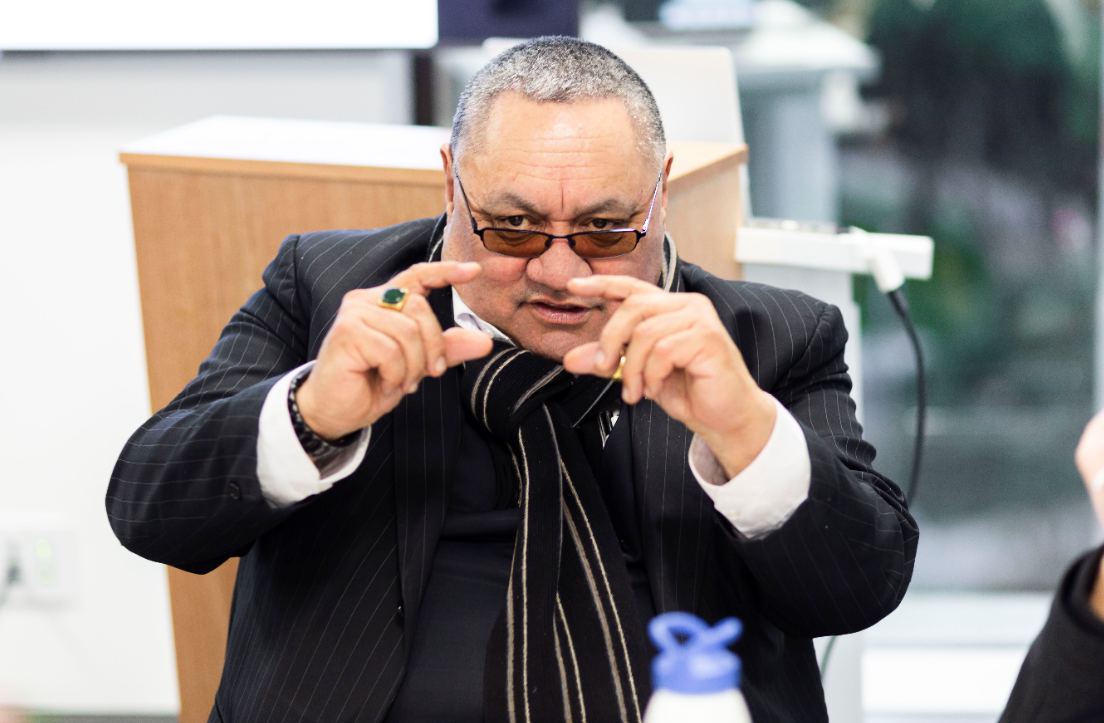 Natalie Labuschagne, Manager for Transition and Regional Economic Development at the New Zealand Treasury, then spoke about her passion for climate change not only as a professional but also as a mother. She emphasised the absolute necessity of embracing diversity in the context of climate change, as climate change is not an issue that can be solved on an individual level. Natalie raised questions about how individuals, communities, countries and regions of countries can collectivise to solve this problem together, especially given the fact that we know the impacts are going to be felt so differently. She outlined some of the specific aspects of economics that are relevant to climate change, including game theory and the ‘tragedy of the commons’. She concluded by saying that we are already starting to see shifts in action, because climate change is so immediate and present that countries now have to start acting on their own. 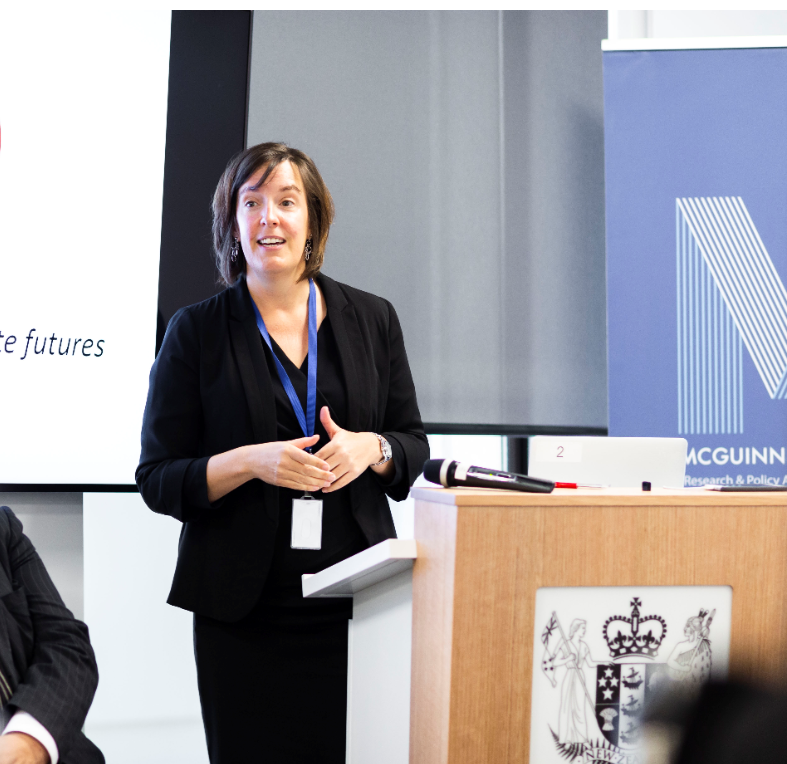 Gina Lefaoseu, Deputy Principal of the Holy Family School in Porirua, shared her experiences working in a decile one school, which is made up of almost entirely Māori and Pacific students. Gina focused on the importance of collaboration when dealing with change; she spoke about breaking the division between New Zealand and the Pacific, saying ‘we are all Pacific Islanders’. She bemoaned that those most economically vulnerable to climate change have the least ability to affect change, and the people whose ancestral homelands are going to be impacted first are not those who are sitting at the decision-making tables. 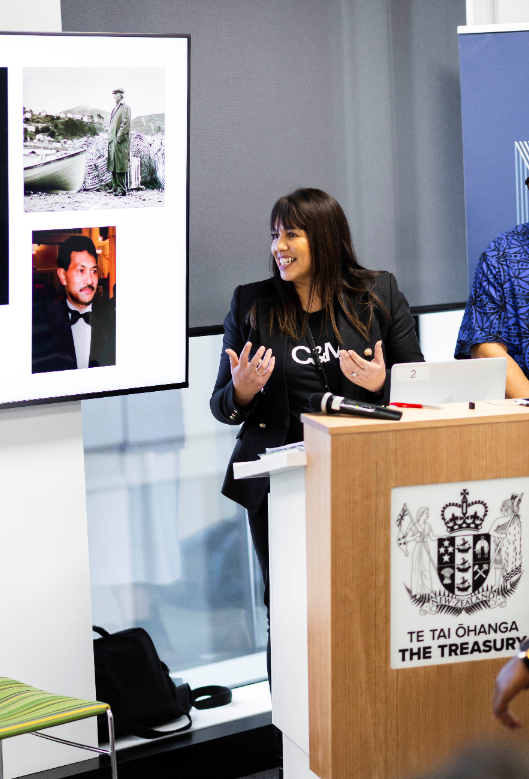 Gina also brought with her three school students, who each shared their desire to fight climate change to ensure the continued lineage of their Pacific island nations and cultural heritage. Peter Setefano, Director of Religious Studies at Holy Family School, translated for Mr Pita who is a Matai Chief; Mr Pita spoke about the growing pollution within Samoa and how we need to actively change the way in which we use the lands in which we live in order to preserve them.

Gina ended her talk by outlining the four principles she recommended for coming together across all communities and age groups to deal with climate change:

1. we are all Pacific lslanders;
2. connect to our hearts;
3. connect to each other; and
4. look back with hindsight to ensure we can look forward with foresight. 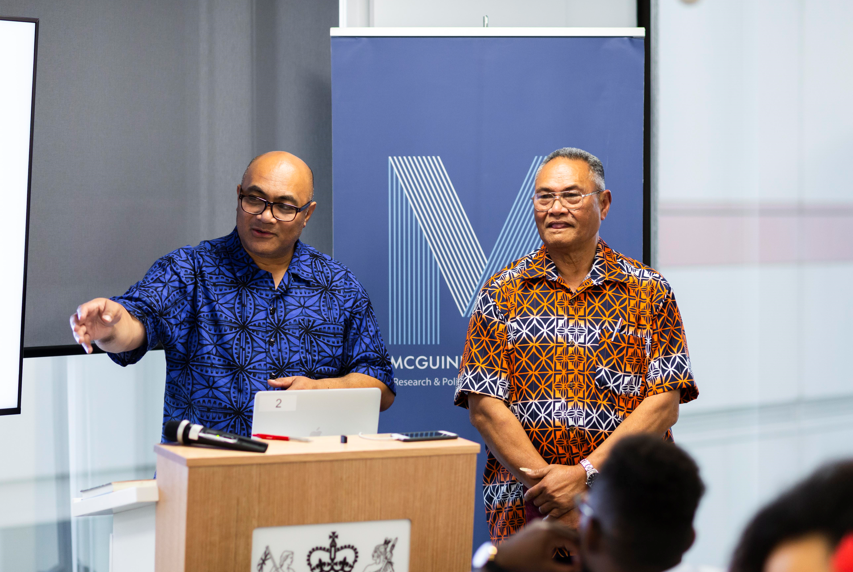 Following was Saia Mataele, a Management Consultant at PwC, who also is involved with several not-for-profits that work with Māori and Pacific communities. Saia grew up in Vava’u, Tonga, and opened his presentation by saying that he worries about the cyclone season in Tonga around Christmas time. He stated that category five cyclones are becoming more common, a clear cut sign of climate change. Saia emphasised that the impacts of such climate events are intergenerational and continue to resonate even after the actual event.

Saia broke down his presentation into a few key areas that need particular attention in order for the Pacific to be more resilient to climate change. These included the Pacific economy and its reliance on tourism, and the Pacific lifestyle including food gathering and consumption within an environment with depletion of fishing stocks. Saia also discussed the importance of technology in mitigating climate change and reducing impacts on island regions. He praised the development of Green Tech and renewable energy, and stated that it should be used as a lever to reduce impacts while still meeting economic goals. 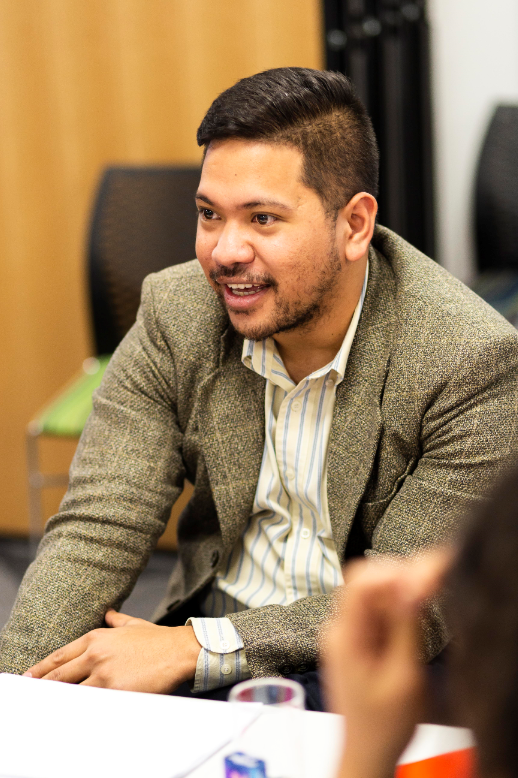 The last speaker of the day was Neville Peat, author of The Invading Sea: Coastal hazards and climate change in 21st-century New Zealand. He highlighted the fact that the trend of rising sea levels varies significantly worldwide and that the Pacific and New Zealand are experiencing faster sea level rise – for example, Tuvalu’s rate of sea level rise is twice the global average. Neville also emphasised the impact of coastal erosion and ground water rise, using the vulnerability of archaeological sites such as one of the most important moa hunting grounds in New Zealand as an example. 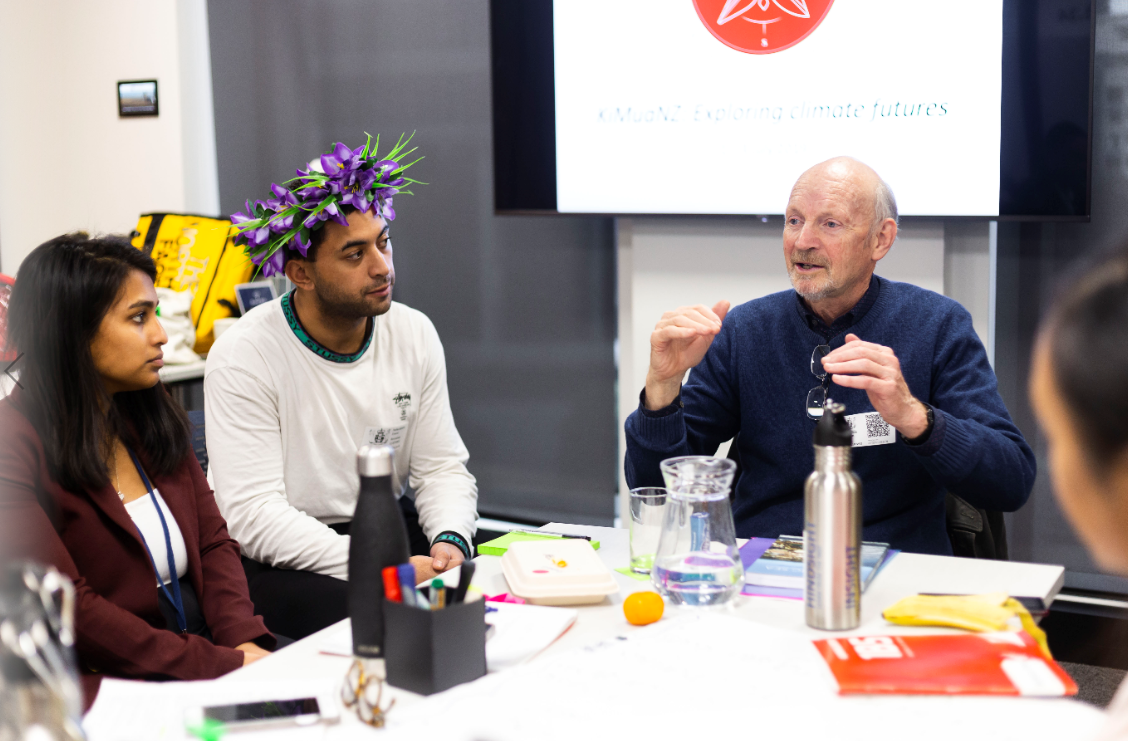 At the end of each panel and hot seat discussions, the participant groups presented back their key learning from the speakers. 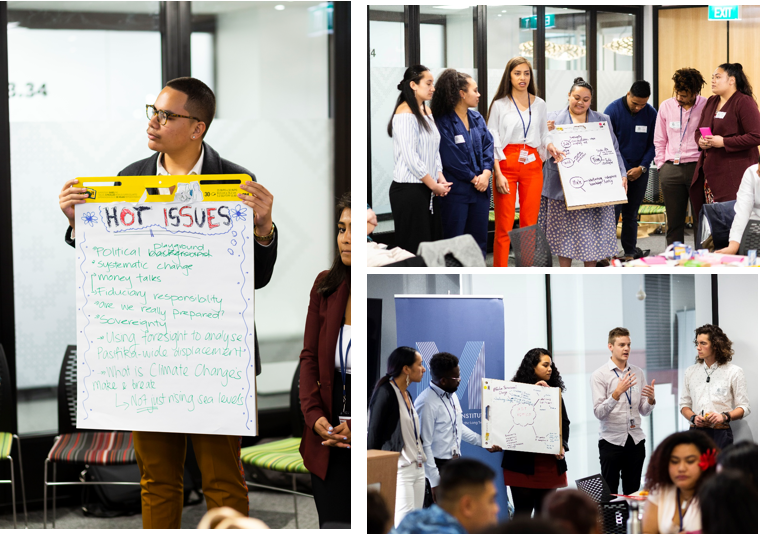 Before leaving Treasury, Rima Moeka’a, Cook Islands, and Laavaneta Juliano, Structural Engineer at Ministry of Infrastructure and Sustainable Energy, Kiribati, gave their reflections for the day. 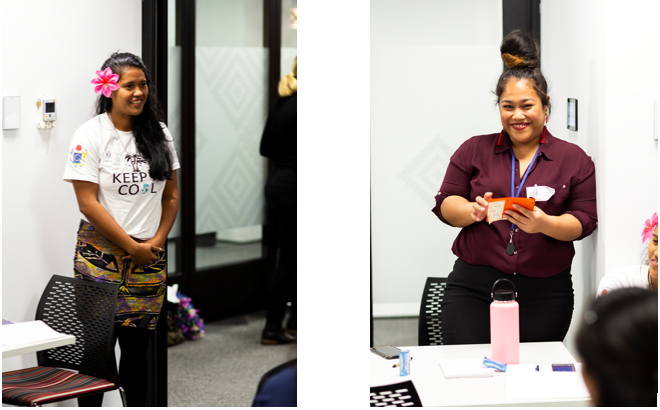 The second day of the workshop closed with a dinner at the McGuinness Institute and a presentation from Pasifika artist Michel Tuffery. Michel discussed how to convey challenging ideas through alternative methods; in his case, art. Speaking alongside a series of images from his art collections, Michel gave the participants the challenge of thinking outside the box when sharing their learnings from the workshop with their communities. One of the key anecdotes centred on Michel’s sculpture Buru Transforma Kangaroo (2014) (see below) which eventually caught the attention of an entire small town in rural Australia, and invited them to think about indigeneity, recycling and community youth engagement all in one. 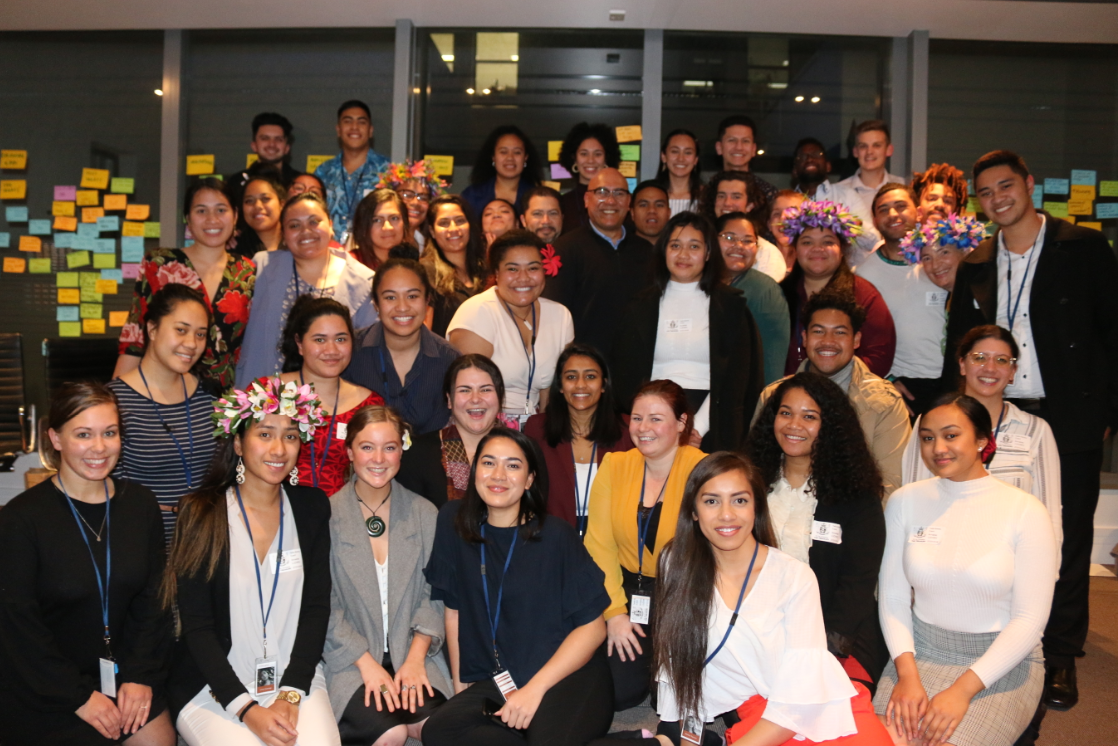