Welcome to the TalentNZ Menu of Initiatives. The Menu is designed to invite discussion and reflection over a range of possible initiatives to attract talented individuals to live and work in New Zealand, and is a part of the McGuinness Institute project TalentNZ.

TalentNZ builds on Sir Paul Callaghan’s vision that New Zealand be ‘a place where talent wants to live’. We have researched this idea, which he originally advocated in 2011 at the StrategyNZ workshop, and can report back that he was ahead of the curve. He could see the important role that talent would have in New Zealand’s economic and social development, he understood the capacity of young people to surprise us with their talents, and he knew we needed to develop a mindset where we respected those whose talents were different from our own.

Today you cannot open a magazine or newspaper without reading about the role of talent in economic and social development in some way. The countries and communities which learn how to implement Sir Paul’s vision, and deliver an ecosystem that grows, attracts, retains and connects talent have a real opportunity for long term success. Countries and communities that do not actively pursue the creation of dynamic, talent-based economies are more likely to struggle in the long term. Talent attracts talent, dynamic talent ecosystems will create a gravitational pull, and we want that pull to be in New Zealand’s direction. This will require hard work and a mindset where communities build on their unique strengths and weaknesses.

TalentNZ began in 2012, and it has already proved to be quite a journey. To the amazing Kiwis doing extraordinary things who we have met along the way, thank you all for your support, we could not have come this far without you.

The McGuinness Institute will maintain this website to allow more ideas to be gathered and shared. We hope this page will provide clarity over how communities might develop cost-effective and innovative solutions to strengthen their gravitational pull and deliver better outcomes to their citizens. To this end we welcome your feedback, your examples and any additional research you think might be useful: please get in touch.

Enjoy, and in particular check out the examples of how Kiwis are working hard today to make New Zealand a place where talent wants to live.

Below under the four categories; Grow, Attract, Retain and Connect, are seven initiatives that are designed to help talent flourish. We do not expect this to be a complete list, but we hope that they provide a platform for an ongoing discussion. If you have a comment specific to one of the seven initiatives, or would like to share your thoughts, observations and ideas for new initiatives please email us at enquiries@mcguinnessinstitute.org. Together we can provide more clarity over what works and what does not. The below quotes are from kiwis interviewed in the 2013 TalentNZ Journal.

‘I would ask of them [young New Zealanders] to broaden their education, to read widely, to get the basic tools to analyse the world’s data rather than be at the mercy of it.’

‘Honestly, school is so far removed from the actual skill sets you’re going to need,  unless you want to be an actual researcher or teacher.’

‘If I could rewrite the school curriculum, I would say let’s forget French and let’s make sure that programming is a core language, because it is the language of the 21st century.’

‘Talent does attract talent, and talent wants to live in places where it is exciting, where they are challenged and stimulated in many different ways.’
– Andrew Coy
‘A big part of acquisition is not just of customers, but of talent.’
– Rod Drury
‘Immigration policy is key; we cannot build the scale ourselves because we don’t have enough people.’
– Raf Manji

‘In terms of retaining people, we try to do right by our staff, giving them the freedom to do their jobs and the satisfaction from “getting shit done.”’
– Mike (MOD) O’Donnell
‘I’ve personally thought about going home [to New Zealand] at times over the past ten years and it is extremely difficult …’
– Rachel Carrell
‘I believe we have a window of five years maybe whilst New Zealand has this opportunity to ride the crest of the wave of staying relevant in this digital age.’
– Rik Athorne

‘I think we’re relatively weak at leveraging the global network of New Zealanders. They’re all out there but they are not leveraged well.’
–  Tim Bennett
‘Part of the secret is knowing who to talk to when you have a problem, because a problem is an opportunity.’
– Graeme Wong
‘Innovation happens when ideas have sex, and that only happens if you put a whole bunch of different disciplines in the same place and let them bump into each other.’
– Kaila Colbin

Colin Lynch speaks about identifying the talent you want (Attract 2)

Janice Feutz speaks about using talents we have (Retain 1) 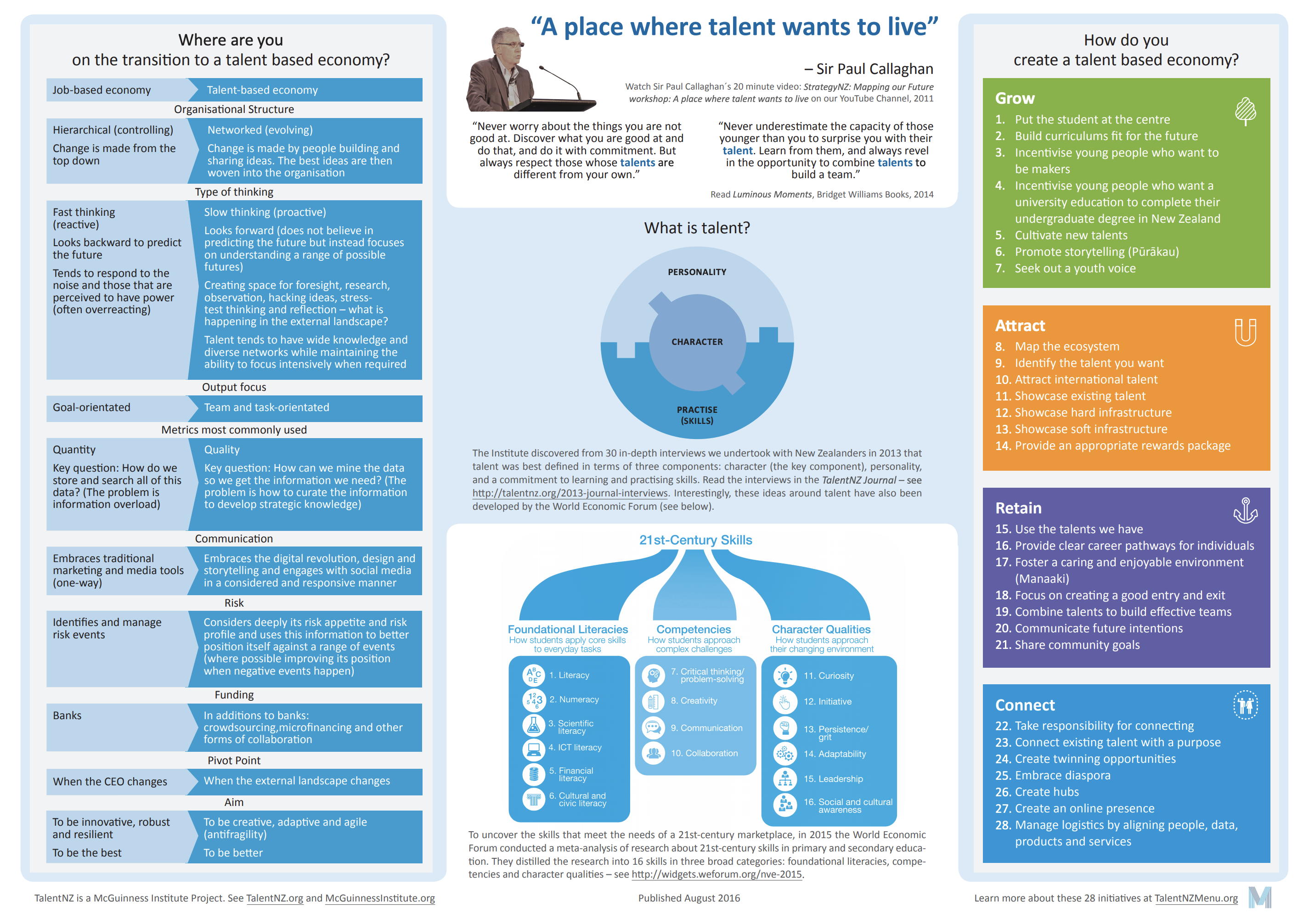 ‘A place where talent wants to live’ Infographic 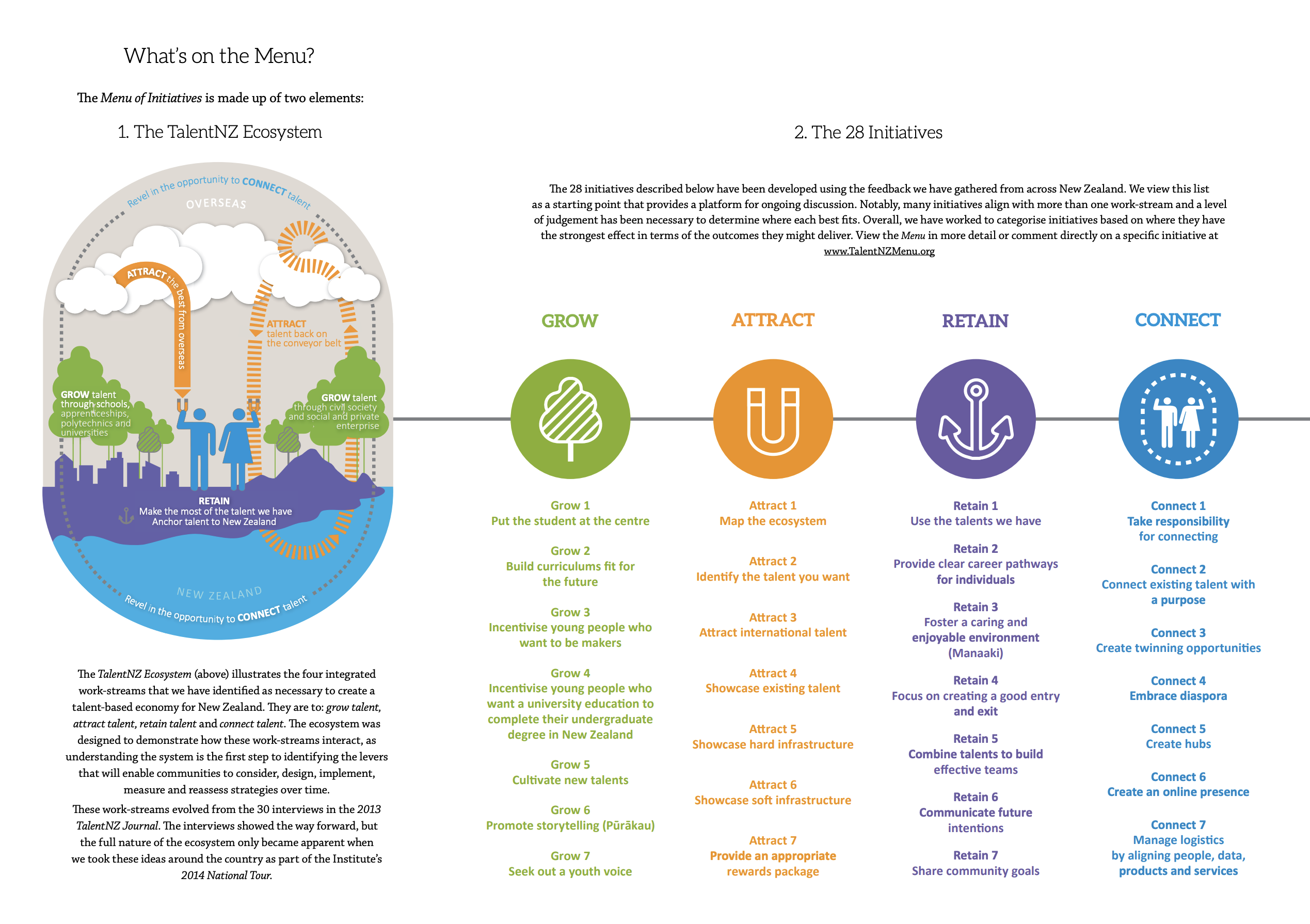 What is TalentNZ?
TalentNZ is a McGuinness Institute project designed to facilitate a structured discussion on how to make New Zealand’s talent-based economy flourish. Since starting in 2012, the Institute has produced multiple outputs, which can be viewed on the TalentNZ research project page.The four work streams of TalentNZ (grow, attract, retain and connect) evolved from the 30 interviews that became the 2013 TalentNZ Journal. The interviews informed our next steps, but it was during the TalentNZ 2014 National Tour that the unique nature of each community’s Ecosystem became apparent. Each community has their own strengths, weaknesses, opportunities and threats. They were all actively seeking initiatives that might help their current talent-ecosystem flourish. The Menu of Initiatives aims to provide a platform for a deeper discussion within communities.

Where did the idea of TalentNZ come from?
In March 2011 the Institute had the honour of having Sir Paul Callaghan as the keynote speaker at its first major workshop, StrategyNZ. In his 20-minute presentation, Sir Paul expressed his belief that a focus on talent was crucial for New Zealand’s future. The TalentNZ project is the Institute’s response to Sir Paul’s idea of building a talent-based economy for New Zealand.

What does talent mean?
Each of us has a range of talents. However, not everyone is fully aware of what these talents might be, how they might be developed or how we might connect with other people interested in similar outcomes. In 2013 we undertook a great deal of research to determine what was meant by talent, and concluded that there was not a single definition. From the Institute’s perspective, ‘talent is a mixture of personality, character and focused practice (which leads to skills) but most importantly we believe that character is key’. This is the first of our seven assumptions.

What are the seven assumptions?
The seven assumptions set the scope and purpose for the project and were developed from our initial research in 2012. They were the starting point for the 2013 TalentNZ Journal, and have continued to guide our thinking as we receive feedback and develop greater clarity over the work programme going forward. The seven assumptions were stress-tested in 2016 during the May TalentNZ round table discussion and were found to still be relevant as the foundation for the TalentNZ project.

What is the Menu of Initiatives?
The Menu of Initiatives focuses on how best to identify and communicate the tools for councils so that they can design their own unique strategy for creating a talent-based economy. Our focus was on how best to identify and communicate the tools that work. We recognise that each community has its own character, personality and skill set. The Menu is designed like a menu you are given at a restaurant. In the same way that one cannot eat every item on a restaurant menu, nor can a community implement every initiative on the Menu of Initiatives. Councillors and communities will therefore need to discuss, research, try out and reflect on which initiatives might work best for them.

I know a really great initiative that should be included – how do I let you know?
If you can think of any initiatives that we should include on this website, or feature on our TalentNZ newsletter please email us your example and let us know which page you think your example applies to – grow, attract, retain or connect.