Sharing the baby box with the Wellington community

As part of the TacklingPovertyNZ initiative, we met with officials from the New Zealand Treasury and DCM Wellington this morning as the Treasury gifted DCM a baby box from the Baby Box Co. DCM (formerly known as Inner City Ministry and then Downtown Community Ministry) was founded by a group of Wellington churches in 1969 as a response to the needs of the rapidly changing inner city area of Wellington. The Treasury wanted to gift the baby box to DCM as staff at the Treasury have an ongoing relationship with the organisation. This is the beginning of a new journey for the baby box as it is shared with the community. At this meeting we saw a photo of a Ngāi Tahu Pēpi Pack that had been received by a Treasury staff-member. The baby box concept is going global and we are interested to follow what is happening in New Zealand. To learn more about baby box initiatives happening all over the world, read the BBC article Why babies all over the world are now sleeping in boxes here. From left to right: Michelle Scott from DCM, Trevor Moeke, Principal Advisor of Crown-Māori Capability at the New Zealand Treasury, and Wendy McGuinness with a baby box from the Baby Box Co.

Background to TacklingPovertyNZ and the baby box
In December 2015, the McGuinness Institute undertook a three-day TacklingPovertyNZ workshop in collaboration with The New Zealand Treasury. The purpose was to explore ways to reduce poverty in New Zealand. As a result of the workshop, participants outlined their suggestions on how New Zealand might tackle poverty in a booklet. To read their recommendations download their booklet (published 19 February 2016) or to learn more about the 2015 workshop, please click here.

On 3 March 2016, seven of the original TacklingPovertyNZ participants came together at the New Zealand Treasury in Wellington where they shadowed officials from the Treasury and presented the TacklingPovertyNZ booklet. At the presentation the group presented the Treasury’s Secretary and Chief Executive, Gabriel Makhlouf, with a baby box from Baby Box Co. as a gift. In the booklet, the December 2015 participants discuss the idea of introducing a baby box based on the Finland model to New Zealand. 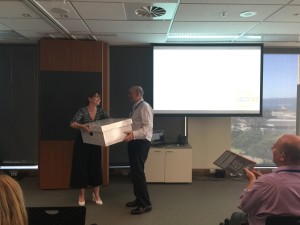 Lydia Hollister-Jones presents the Secretary and Chief Executive of the New Zealand Treasury, Gabriel Makhlouf with the baby box.

2016 Workshop tour
On 29 March 2016 we began our TacklingPovertyNZ tour in Queenstown with a group of local participants. Later this year we will continue the tour of one-day workshops around the country. Our aim is to contribute to a national conversation about how New Zealand might tackle poverty. After each workshop we will prepare a discussion paper to map local issues and to explore ideas participants developed throughout the day. In addition to being available to the public, each discussion paper will be given to the Chief Economist of the New Zealand Treasury.

The next stop on the TacklingPovertyNZ tour is tentatively booked for Rotorua on 19 August 2016. We are currently in discussion with other regional councils including Far North District Council, Gisborne District Council and Manawatu District Council. If you are interested in being involved in your constituency’s local tour, or in nominating local participants, please contact us at tacklingpovertynz@mcguinnessinstitute.org.

TacklingPovertyNZ Newsletter
We are pleased to announce that the first TacklingPovertyNZ newsletter is now available to view on our website. In this first issue we provide an overview of the outputs from the December 2015 three-day workshop. This led to a decision to pursue the TacklingPovertyNZ national tour; the first stop was in Queenstown on 29 March 2016. We also share some of the latest significant research on poverty both at home and abroad.

If you would like to receive the TacklingPovertyNZ newsletter, please register here.