Former Holy Family School principal Chris Theobald, former deputy principal Gina Lefaoseu and programme manager Metua Tengaru have worked hard on the parent-school partnership and the Institute is pleased to see the work of The Family So’otaga being recognised on a national level.

Judges commended the school on utilising its multicultural nature as a strength and for creating an education that fits their students’ needs:

The way this school has engaged with their Pasifika community was a huge step up. The entry demonstrated a significant change in roles, achievement of children, and community involvement in the school.

The school values what is important and has developed a good understanding of themselves and their community. The school’s ethos of education being fun and that children should get the education they deserve was commended. Another commendable aspect was the school’s consultation and connections with former students. 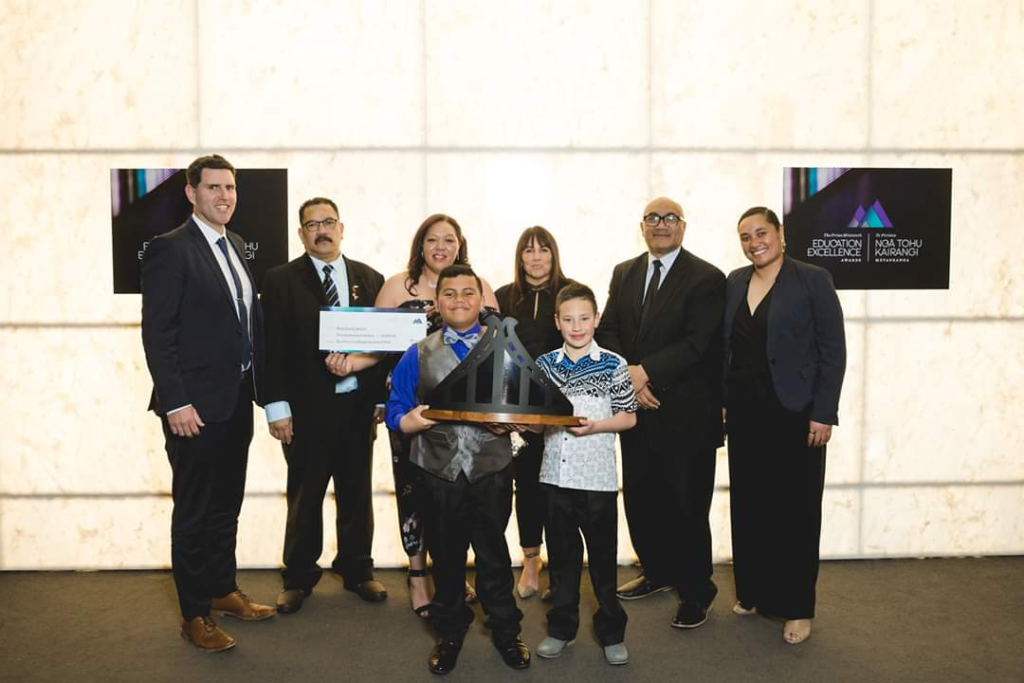 On the back of this initial success the programme is now expanding to Bishop Viard College, a secondary school in Porirua, where Chris Theobald is now principal. The Family So’otaga programme is also forming the basis for Te Arawa Whanau Ora programme which is set to be implemented at Sunset Primary School in Rotorua.

Principal Chris Theobald was pleased that Holy Family School had won but said the credit should go to the community as well:

The support of the McGuinness Institute and the McGuinness Foundation has enabled Gina and her team to co-create a bespoke programme alongside our community, a programme that became enmeshed with the whole kaupapa of Holy Family School – based on valuing our parents and whānau, understanding the true role of schools and teachers in humbly supporting aspirations for students and whānau by any means possible. The national recognition proved that this is the direction that many schools need to go in

The term ‘So’otaga’ – Samoan for ‘connection’ – was chosen as a name to represent the programme’s goal: to empower parents and whānau to be involved with their children’s learning, and to give families the tools to be highly involved with their children’s education. The central focus is to keep community and whānau at the forefront and to provide a teaching-style that reflects the students’ cultural backgrounds.

The students at the decile one primary school come from various cultural backgrounds, with the majority having Pasifika heritages (including Samoan, Tokelauan, Tongan, Niuean, Kiribati, and Tuvaluan). As many students’ whānau have immigrated to New Zealand and may not have experience with the New Zealand education system, the thought was to educate and empower parents and families to make the most of the education system.

As a result of The Family So’otaga programme, students’ educational outcomes have substantially improved, the school’s roll has increased and parents said they feel much more active in their children’s education.

You can learn more about The Family So’otaga programme below: