Day two of the ForesightNZ workshop began with participants regrouping and reflecting on the previous evening’s session with the Hon. Bill English, Deputy Prime Minister, Minister of Finance and Minister Responsible for Housing New Zealand Corporation, and Colin James, political journalist. Participant
Solomon Esera shared a powerful poem about his experiences of the workshop so far:

Everyday
It’s a low living standard way
Plan away
But the bills flow in anyway
One day
My people always pray
But its ideals and theories and concepts and speeches and teachings and readings and thesis and thinking it’s like sinking it’s rethinking
Don’t blink Koz you’ll miss the link… But I fight anyway I fight in every way but I ask myself everyday is this my way? 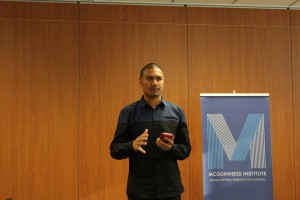 Roger Dennis opened the first session, Signals from the future visible today. Roger, an innovation, foresight and transformation consultant, discussed the futures of technology, and asked participants to imagine a world where technology has further fundamentally changed the way we live our lives. He used the example of virtual realities – what will virtual realities mean for the world, as they will enable us to walk and communicate more easily than in the present day. Frances Valintine, Founder of Tech Futures Lab and Founder and Chair of The Mind Lab by Unitec, explored the futures of the workforce. She asserted that given current projections, the world’s population will exceed 10 billion by 2050, and this population growth will impact the world as we know it today. Frances argued that population increase will put pressure on the workforce, a tension which is made more acute owing to the increasing automation of jobs due to technological development. Frances left the participants with the idea that the current 40-hour work week framework might change, and we need to be prepared for this shift. Courtney Meredith, writer, performer and arts manager, opened her presentation with her poem Back Home, which she wrote when she was 25 and living overseas. Courtney shared how this experience fundamentally changed the way she saw herself and the environment around her. She emphasised to participants the importance of creating an environment for success through community engagement, cross-sector collaboration and speaking up. Cathryn Monro, professional artist, writer, education and group worker, discussed the futures of story. Cathryn explained that each person has a different version of the same story in their head based on their own personal assumptions. From this, she argued that we need to be open minded about other peoples’ interpretation of the story at hand. Cathryn contended that understanding that differences in interpretation occur will facilitate collaboration and encourage the creation of some possible ‘future stories’ for our country. Freya Daly Sadgrove, editor at the McGuinness Institute, explored the futures of language. Freya stated that language develops constantly, from Shakespeare revolutionising the English language to new words added to the Oxford Dictionary each year. She also discussed how language is the carrier of culture, stressing the importance of learning other languages to get a glimpse into other cultures and societies. Freya left the participants with a thought: ‘I’d like to see a world where people speak a language which feels good in their mouths. No one is going to understand you if you don’t understand yourself.’ Jessica Prendergast, a freelance foresight consultant based in Germany, stated that experience and engagement is very important when thinking about foresight. She encouraged participants to continuously think about policy, risk management and integration of decisions. Jessica gave the workshop the example of the European Union, which requires foresight projects before any policy is implemented, to reinforce her point. Jessica Prendergast discusses the future of foresight with participants After the six presentations, the speakers were each matched with a group of  six participants. The speakers and participants discussed the beginnings of a card game ­– one of the outputs of this workshop. The purpose of the card game was to create a foresight and communication tool (the game) that showcases the way New Zealand’s youth thinks about possible futures (the cards). Each group came up with very different ideas relating to the structure and content of the game, and drew inspiration from popular games such as Cards Against Humanity and Balderdash. The six groups shared their ideas with the rest of the workshop participants, and also stress-tested their game against the speakers. This process allowed the groups to challenge and refine their card games. A group identifies trends and events for their card game

Later in the afternoon Linda Clark, Special Counsel at Kensington Swan Lawyers, spoke to the participants about work-life balance and policy. The underlying theme of her presentation was encapsulated by a Gloria Steinem quote:­ ‘The first problem for all of us, men and women, is not to learn, but to unlearn.’ Linda presented some astounding statistics to the workshop – 61 percent of all tertiary education qualifications are gained by women, but women earn 12 to 15 percent less per hour than men. Linda asked the groups, ‘why is it so hard to establish equal pay between men and women for equal work?’ She outlined three ideas: systematic inertia, unconscious bias and children. Linda challenged the participants by asserting that we are not going to see change if we continue in the way that we are going – we need to change the way we look at problems and change the way we define ‘good’ or ‘successful’ behaviour. 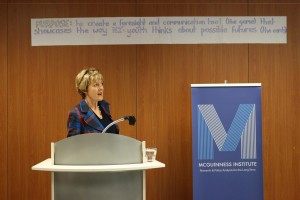 Mike ‘MOD’ O’Donnell, a growth manager and professional director, discussed ten themes participants can use ‘to make sense of a world gone mad’. These themes included the disruptive innovation model, (which describes how TradeMe was a disruptive innovation to newspapers); aggregation (e.g. Uber owns no cars but is one of the biggest transport companies); and mobile confluence (which captures how mobile phones now have the capability of voice recognition and interpretation, location and navigation). Mike closed his talk by reinforcing the idea that we do not know where the web is going to take us: ‘The web is now your computer. We have all moved into the cloud.’

Tim Bennett, Chief Executive of NZX, described three trends that will impact us in the next five, ten and 20 years. His first was that the news will not be as we know it now as the core funding in media, classified advertising, has been decimated. The second trend was self-service: soon we will have virtual currencies and mobile devices that will house vital personal information. Tim’s third and final trend focused on identity. He asserted that soon identity will not be defined by age, gender, ethnicity or nationality, instead, it will become what you own and everything you have done. Tim argued that the environment is sure to change in the next five to 20 years and we need to adapt and embrace it. Ivan Kwok, Principal Advisor of Natural Resources at the New Zealand Treasury, closed day two of the ForesightNZ workshop with a Q & A session. Ivan argued that the rate of change is steadily increasing and, although no one can predict what change will look like, we know it will happen. He discussed the importance of being ready for change and said that we need to be brave so that when the time comes we will be able to embrace change. However, Ivan also warned that we need to have checks and balances so that we do not fall ‘out of line’ when change occurs. After the discussion with Ivan, the participants walked back to the McGuinness Institute where they further discussed and refined their card games. By the end of the night, the group had agreed on one pack of cards which can be used for three different games.