The Future of Farming: Programming perfect produce event was held on Saturday, 3 June 2017 in New York at the Saveur Test Kitchen. The event brought together self-described ‘nerd farmer’, Professor Caleb Harper and Editor-in-Chief of Popular Science magazine, Joe Brown, with Chef Christopher Burgess to demonstrate ‘food computers’. Food computers are climate-controlled, tabletop-sized systems that allow the simulation of any growing environment through the control of variables such as nutrient levels, temperature, and atmospheric conditions. The idea of the open-source system is that anyone can use it to experiment and educate themselves on the conditions that cause different phenotypic expressions in plants (phenomena that cause the expression of specific genetic tendencies).

Professor Harper opened his discussion of food computers by broadening the idea of a food crisis into the multiple trends we are already beginning to see:

He challenged the audience to guess the average age of an apple in a US grocery store and no one guessed even close to the answer of 14 months, an age at which the fruit has very little nutritional value left. Professor Harper and his team are interested in what this might mean for the next major sociocultural revolution, given that agriculture and food production have played significant roles in global sociocultural revolutions in the past (e.g. agricultural and industrial revolutions). For them, the answer lies in transportation of data rather than produce, specifically atmosphere information such as temperature, humidity, CO2 and O2 levels; root zone information about bacteria and microbes; and water information about temperature, oxygenation and nitrogen, phosphorus and potassium levels. If climates can be coded and moved around as tools, then the expression of plant genetics can also be coded to maximise nutritional and flavour results.

Professor Harper noted that ‘the digital world and the 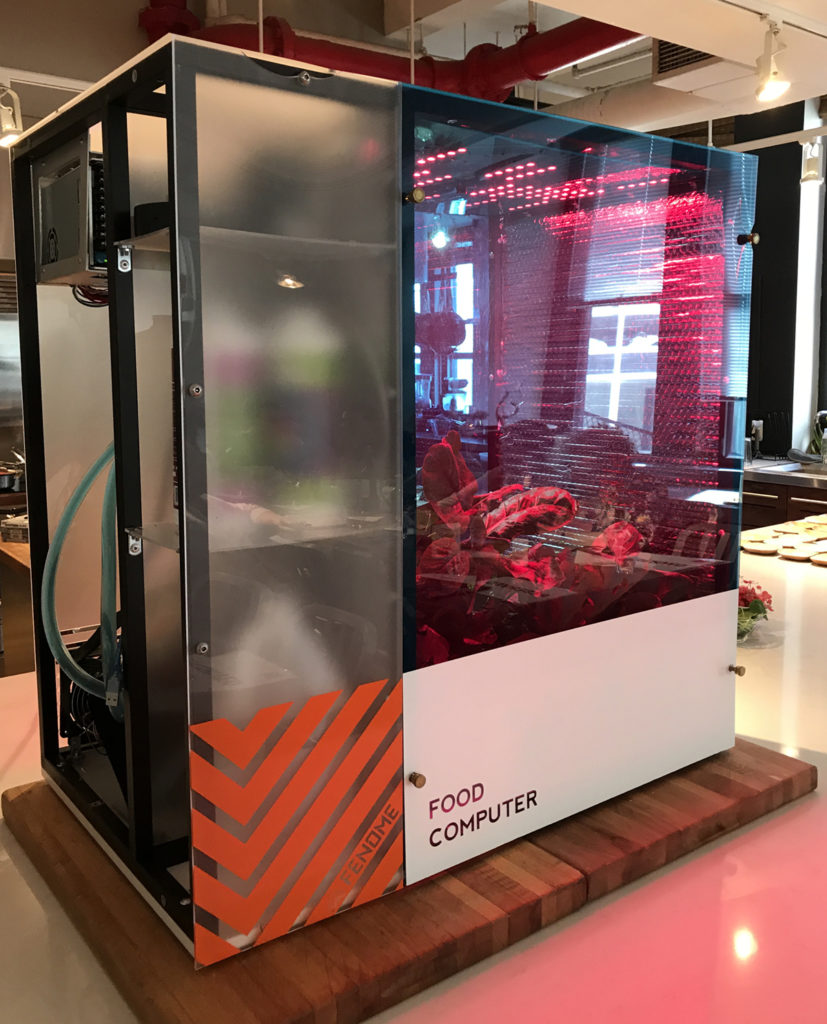 life sciences world are slamming together and giving us new possibilities’. This is reflected in the fact that, despite originally being called the Digital Media Lab, in the last four years, six out of the 30 separate MIT media labs have been involved in bio work. This has been compounded by the significant advances in genome sequencing that have corresponded with decreases in cost. This is not the only tie between the food computers and genetics; the data gathered by the food computers become part of what Professor Harper refers to as ‘the open phenome project’, which he compares to the open-source Human Genome Project. The motivation behind making food computers open-source is to contribute to a movement, and enable scaling up and increased problem solving capability. The food computers’ open-source data and technology is now being used in 41 countries. Professor Harper considers some of the most effective human innovations to have been the result of movements and cooperative networks of people sharing their findings. He points to the example of the coding movement and posits that the next movement is the bio movement.

In the close of his presentation, the importance of the bio movement became apparent. Professor Harper presented a map prepared by the World Health Organisation demonstrating that 80% of the world is food-insecure, meaning that they do not produce enough food to feed their domestic population. In addition to this, a number of food-insecure countries produce food for other countries. He went on to outline the routes of that exported food as a visualisation of the industrial revolution. However, the cost of transported produce is the degradation in nutritional value of that food (with the exception of frozen goods). Professor Harper’s vision is to transport the roughly three and a half million data points of a growing plant overseas rather than than actual produce. This is a bold and ambitious idea that will have significant implications for the future of agriculture.

Bios from the event page
Caleb Harper is the Principal Investigator and Director of the Open Agriculture (Open Ag) Initiative at the MIT Media Lab. He leads a diverse group of engineers, architects, and scientists in the exploration and development of future food systems.

Chef Christopher Burgess is currently the executive chef/owner of Fresh Kitchen, where he spends his time between the kitchen and local organic hydroponic farms. Burgess grew up working in kitchens, where he learned at an early age that quality food was an essential ingredient to good living.

Joe Brown is the Editor-in-Chief of Popular Science. He has made his career as a science and tech journalist and editor, with a passion for modernising high-quality magazine-style journalism.