The sixth and final TacklingPovertyNZ one-day workshop for 2016 was held in Kaikohe on Friday, 16 September 2016 at Kaikohe Memorial Hall. The workshop was opened by a hymn and a mihi whakatau, which was then followed by a song performed by two participants. Mayor Hon John Carter also shared his thoughts on poverty in the Far North and asserted the need for urgent and significant change. 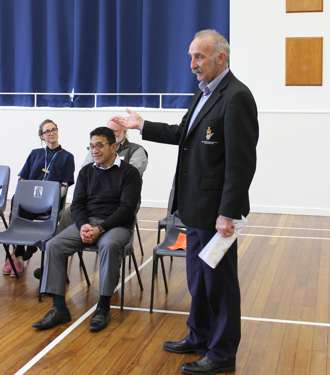 Participants then heard from the New Zealand Treasury’s Chief Economist Dr Girol Karacaoglu, who spoke about the future of Treasury’s social investment strategy. Girol contended that the government’s role is not to come up with solutions for problems but to support people within communities so that they themselves can solve their own problems. 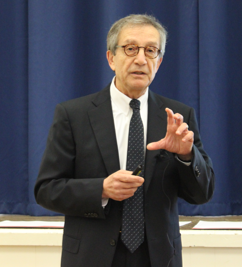 After Girol spoke, participants went around the room introducing themselves and sharing what they wanted to get out of the workshop. 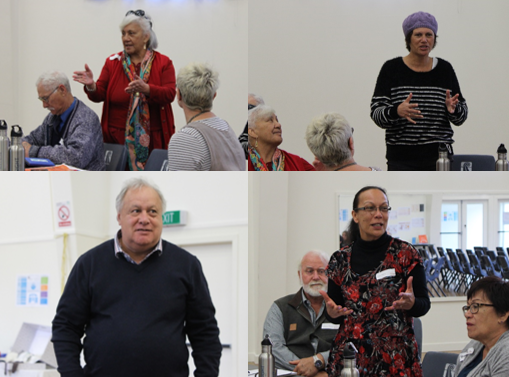 Participants of the TacklingPovertyNZ Kaikohe workshop introduce themselves to the plenary

Jim Luders argued that the current schooling system in New Zealand switches kids off and labels them. To reverse this current trend, Jim asserted that we need to bring decision-making ‘back home’, by creating a community of learning and encouraging schools to diversify, integrate and change. Jim used the example of marae-based education, and stated that ‘we need to do what’s right for the kids, instead of protecting our institutions.’ 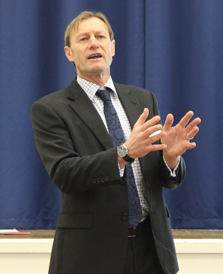 Jim Luders – ‘The more decision-making that’s made local, the better’

Deidre Otene focused on three key ideas: economic development, inter-generational leadership and improving health outcomes. Deidre asked: ‘Where do our values sit in overcoming poverty for the Far North?’ To answer this question, Deidre asserted that we need to ensure: 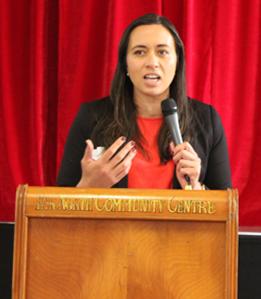 Mark Anderson focused on two main ideas in his presentation: business and education. Mark asserted that ‘big box retail’, such as the Warehouse, is killing provincial towns. Currently in Kaikohe, three of the four largest businesses in town are on the Australian and New Zealand stock-market. This current structure erodes local territorial powers; therefore, he argued that if ‘the big guys’ want to come into town, it should be on the community’s terms. Mark also shared with the audience that currently there is a high number of students who drop out when transitioning from primary to secondary or from secondary to tertiary education. To combat this trend, Mark maintained that we need to change both the decision-making and spending in schools. 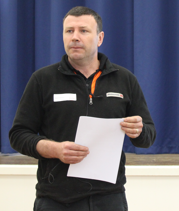 Mark Anderson – ‘If big businesses come to town, it needs to be on our terms’

Tania McInnes focused on the importance of mentoring and tackling the lack of hope in the Kaikohe community, what Tania called ‘poverty of the soul’. Tania asserted that to empower the community we need to combine self-responsibility and community responsibility, and the government also needs to occupy a supportive role (rather than a leadership role). She argued that the Far North needs a vision that steps outside of whoever is in government. Tania maintained that this vision be achieved by starting small and challenging beliefs and norms. 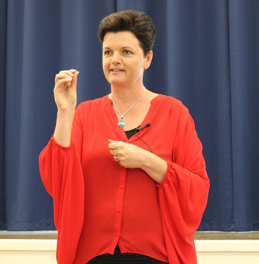 Kelly Yakas focused on early childhood education and whanau support. Kelly asserted that we need to make connections to whenua and whakapapa and we also need to increase early childhood participation. Kelly spoke about the ‘hub’ which she helped create in 2013 – the Te Kohekohe drop-in centre. Kelly described this hub as a neutral space for other organisations to connect through, a place where everyone who walks through the door is valued – there are no labels and no judgement – and there is one-on-one personal connection. 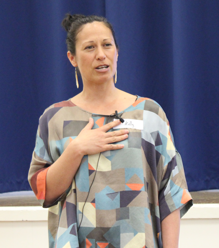 Kelly Yakas – ‘We need to create networks, whether this is through the drop-in centre or visiting people directly in their homes’

In the afternoon, participants separated into groups to discuss issues, challenges and opportunities specific to Kaikohe. Each group developed ‘hows’ and then presented them to the other participants to stress-test their ideas. 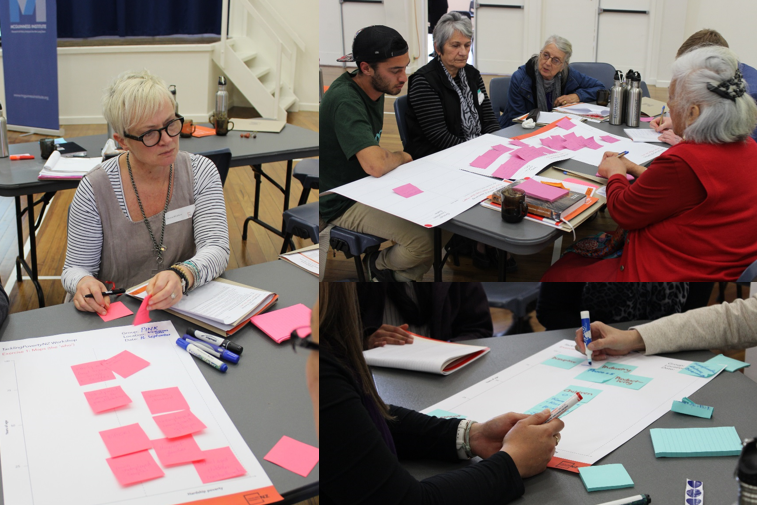 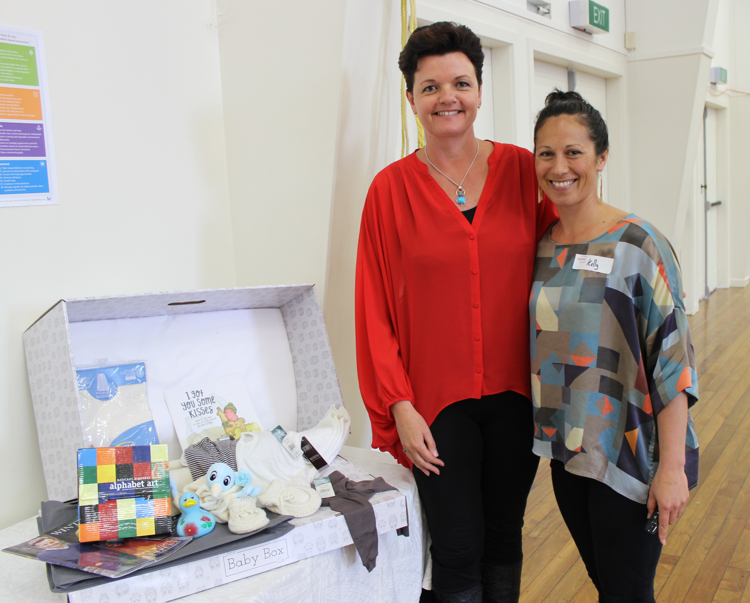 At 4.00 pm, participants and members of the wider community gathered at Kaikohe Memorial Hall to hear participants present their key ideas for the local community. Some ideas that emerged included: identifying community champions and encouraging them to spread knowledge on how to succeed; employing models of co-operation and mutualism instead of competition; and supporting the ‘good things’ already happening in the community and connecting them.

Participants share their ‘hows’ with the plenary at the finale presentation 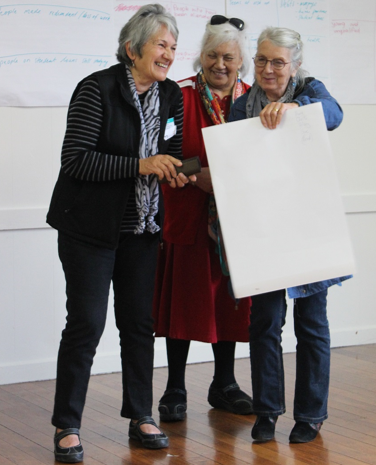 Hillary Warren, Hana Munro and Sue Dunlop-Christie present their ‘hows’ to the audience

Hone Mihaka, a Kaikohe local, closed the workshop. He argued that there is ‘big business in poverty’ and people are falling through the gaps. Hone asserted that we need to ‘share our wins and our losses for the sake of the people we serve, and treat them well.’ 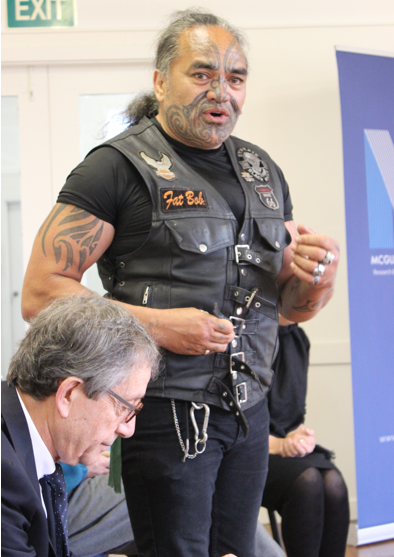 ‘Everyone dreams for us… but we dream too’ – Hone Mihaka

Thank you
We hope this initiative builds and shares ideas on how to tackle poverty both within the Far North region and in
New Zealand more generally. This event would not have been possible without local collaborators Far North District Council and the ongoing support of the New Zealand Treasury. Special thanks also to those parties that have helped with the baby box initiative: Baby Box Co; The Wool Company from Utiku, Taihape; and Replete from Taupo. Please see the TacklingPovertyNZ website for more details on outputs to come as a result of the workshop series.

Background
In December 2015, the McGuinness Institute undertook a three-day workshop in collaboration with the New Zealand Treasury. Its purpose was to explore ways to reduce poverty in New Zealand. This workshop has led to a number of outputs, one of which includes undertaking a tour of one-day workshops around New Zealand throughout 2016. The 36 participants, aged 18–25, from the 2015 TacklingPovertyNZ workshop sparked the tour of one-day workshops as they convinced us we needed a national conversation with local solutions. The first one-day workshop was held in Queenstown on 29 March 2016, and hosted by the Queenstown Lakes District Council. The purpose was to test our approach to see if a useful outcome could be achieved in one day. Discussion Paper 2016/01: A Queenstown Lakes District perspective on tackling poverty is now available online.

Next steps
We are in the process of producing a similar discussion paper from each one-day workshop, and together these papers will provide an insight into the different regional perspectives on poverty in New Zealand, in order to inform national decision-making, support local initiatives, and build and share ideas on how to tackle poverty in New Zealand. The series of discussion papers will be given to the Chief Economist at the New Zealand Treasury and made public on the McGuinness Institute website. In addition, the District Council Mayors will have the opportunity to meet with Minister of Finance, Hon Bill English to discuss the outputs of the workshops and respond to questions from the Minister. This meeting is tentatively set for early November 2016. Later this year we also hope to meet with other interested members of parliament.